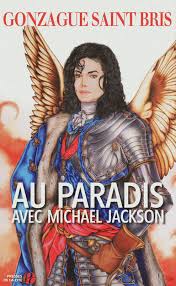 I explained to you what never to do if you are a medium !

Don’t make the same mistakes that I did.

You never behave like me with Mickaël JACKSON and you must listen to what he says to you, always, in all circumstances.

But I had no idea, even when you were speaking, that you announced me “mort”, in french language, for the death of your friend, Gonzague SAINT BRIS.

Because I was not immediatly receptive, so I missed the point.

So stupidly I have told you :

And satisfied with my own answer, I saw your declaration as a cryptic joke. When clairvoyance became a joke instead of being “a vehicle” fort truth, with regard to this particular instance, “my car”, you must understand that you are wrong.

And I was wrong, it was NOT a joke at all.

It’s how I see him, now, in the Light

Mickaël JACKSON did not renounce his project and sent me an image, a vision that showed me texting to a young woman, big fan of his, concerning radio with Gonzague SAINT BRIS who was speaking of him, Mickaël JACKSON. Over the radio, the french aristocrat explained that Mickaël JACKSON had an invisible friend named Jesus and that he looked for Him even in the desert with “Les Pères du Désert”, “The Fathers of the Desert”, Catholic missionnaries who wished to carry out faithfully in their lives all the precepts of Scripture.

Mickaël JACKSON had spent his all life to search Him, Jesus. Who knows that ?

– “Everywhere you have searched before, search again !”

This radio transmission is called “The Keys of life”, “Les clefs de la vie” and was broadcast on 15 of may 2017.

But despite all those efforts, I misunderstood you, Mickaël JACKSON, and I regarded that as a good necrology written by your true friend, Gonzague SAINT BRIS, who defended you against yours nasty and bad-mouthing enemies after your death.

So, for me, it was just the confirmation that you meant your own death.

Not even in my wildest dreams, at that moment, could I imagine that Gonzague SAINT BRIS would die or was already dead and that Mickaël JACKSON appeared to me to announce his death, the death of Gonzague SAINT BRIS, his close friend.

So, when, two days after your “visit”, all the medias in France reported that Gonzague SAINT BRIS, the famous writer, had died as a result of a car accident on August 07, 2017, I finally realize why you surprisingly announced me this sad new when I was driving.

You command me, but so nicely, to write about this death.

– “But why should I write about this subject, YOUR death ?”, I wondered.

So stupid I was !

After your visit, I’ve forgotten to write this article because, for me, there was no rush.

That is the first lesson to be taken from this tragedy, always be attentive :

– this is partially due to a lack of understanding.

Mickaël JACKSON showed me real and concrete elements of a terrible truth.

But, for me, it was a symbolic kind of realm, not “real” words.

I have just to write IMMEDIATELY what he said to me as he requested to me :

and the most evident, the name ot the victim :

– “Gonzague SAINT BRIS” (because of the vision showing me the texting about this radio-transmission so rightly called “The Keys of Life”),

and if I have written as he requested me,

I would have announced, without knowing it, and before all other media, the death of his dear friend, Gonzague SAINT BRIS.

But I don’t take orders from anybody.

And I verify, I try !, all that my visitors have said to me and theirs identities, if they are human identities .

This, in my opinion, is the lesson to be learned from such a long-drawn-out affair.

Requested level is to be confident with my friendly visitors.

It meant that Mickaël JACKSON keeps his people close like a guardian angel.

He was present at the place where his close friend was found.

For the friends and the family of Gonzague SAINT BRIS, I can say

that the good guy is in the good place, in the Light with his friend Jesus and with Mickaël JACKSON.

– The right man in the right place !

They don’t need to worry about their friend or their relative.

You know, a guy who’s got himself a place, the good place, doesn’t have to worry about anything.

You can reach him, Gonzague SAINT BRIS, at his new address, online, in Paradise.

The french aristocrat has not wasted any time because he has a message for the french president MACRON.

I have discovered that it was the title of his last book.

This in itself will be a topic for a future “presidential” article.

Let’s assume, just for fun, that the answer of Mickaël JACKSON, when I asked him to forgive me, is something that might be helpful :

Because it was sufficient to note what Mickaël JACKSON said to me, without trying to understand it.